Posted at 14:47h in Press Releases by Admin
0 Likes
print 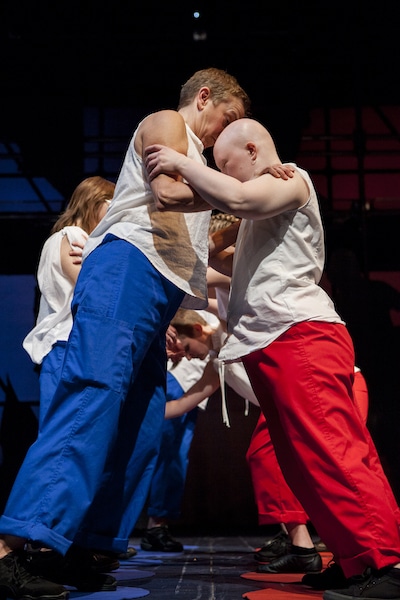 ​GREAT BARRINGTON, MA –​ The Moving Company, resident dance company at Community Access to the Arts (CATA), presents two flash mob performances of “Make Purple” at the Massachusetts State House on Thursday, ​September 21. The performances are free to the public and take place at the Grand Staircase at 1:15pm and 1:30pm. The piece, which premiered at CATA’s “Everyday People” showcase in May, was choreographed by Dawn Lane, who directs The Moving Company and serves as CATA’s Artistic Director. The Moving Company appears at the State House by invitation of State Representative Smitty Pignatelli.

​Dawn Lane remarks: “Make Purple is CATA’s Moving Company’s response to the polarity and conflict in our government. Dancers perform divided “blue” and “red” dances, but the dance is not fully realized until they literally step away from their color zones and dance together to make purple!”

The Moving Company is a mixed-ability dance company featuring dancers with disabilities as well as dancers who have been classically trained. Recognizing the ability, passion and curiosity of several individuals in her CATA dance classes, Dawn Lane formed The Moving Company in 1997. The company choreographs and performs work that both acknowledges and transcends disability and has performed at Jacob’s Pillow Dance Festival, VSA International Arts Festival, Shakespeare & Company, and Made in the Berkshires Festival at Berkshire Theatre Group.

DAWN LANE has been choreographing dance and movement events professionally since 1980. She is a graduate of Massachusetts College of Art and Design (1980, BFA) and Lesley University (1992, MEd). Her curiosity, training and experience with mixed ability casts started as a student at Jacob’s Pillow in the late 1980s. In the 90s, she helped pilot the Elder Arts Initiative thru the Massachusetts Cultural Council, to build opportunities for artists to make community based work in elder settings throughout the Commonwealth. She has presented and performed at VSA conferences and in 2006 was a keynote speaker at the National Brain Injury Conference in Harrisburg, PA. In 2012, Dawn was an Artist in Residence at MassArt, setting her choreography on Studio for Inter- related Media (SIM) majors and artists with disabilities from Gateway Arts in Brookline. Her work has been funded by Jacob’s Pillow Dance Award Initiative, Massachusetts Cultural Council, Mid Atlantic Arts Council, LEF Foundation, Cottonwood Foundation, and VSA Arts International. Dawn is the recipient of a 2010 Massachusetts Cultural Council Choreography Fellowship, a distinguished alumnus award from Massachusetts College of Art & Design, and the 2007 Outstanding Dance Educator Award from Massachusetts Alliance for Arts Education. Dawn is one of three nationally chosen choreographers/dance educators to lead Curriculum in Motion (CIM) residencies for Jacob’s Pillow, a model that draws upon K-12 curriculum frameworks as a source for kinetic learning and student driven choreography. Currently,Dawn is the Program and Artistic Director of Community Access to the Arts (CATA), where she has worked since 1994 and where she directs The Moving Company, a company of dancers with and without disabilities she founded in 1997.