Posted at 21:14h in In the News, News by Chris Watford
0 Likes
print 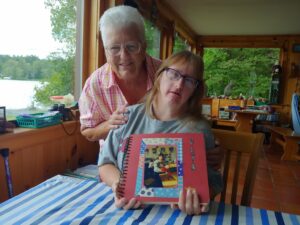 June Thomas with daughter and CATA artist Teresa Thomas, who has recorded nearly every performance since 1993 in a scrapbook. Photo by Robbi Hartt

“I’m known as Teresa’s mom by everyone at Community Access to the Arts,” June Thomas smiles. “CATA is Teresa’s lifeline! You should see the scrapbook she has, going all the way back to 1993, when Sandy Newman offered the very first dance class.”

By the time Teresa Thomas was transitioning out of high school, her older siblings had all gone on to college. “CATA college,” as she called it, was a similar move for Teresa as she stepped into adulthood, giving her an opportunity to help her discover new skills and develop new talents.

June Thomas proved instrumental in fostering the environment. In 1996, while volunteering with Shakespeare & Company, June asked founding director Tina Packer if she could “borrow” some of her actors to work with Teresa and her friends—the beginning of a life-changing partnership for CATA and its participants. Since then, Teresa has been involved in every program CATA has offered. “She doesn’t dance anymore,” June explains, “but at nearly 50 she still does everything else.”

For two decades, CATA has been changing countless other lives, partnering with 50 community organizations to bring visual and performing arts programs to 800 people with disabilities across Berkshire County and Columbia County, New York. That first dance workshop has grown to over 1,800 arts workshops annually.

Shakespeare’s Players is one of many workshops offered across a variety of genres and art forms at CATA—and an important connection for bringing Kelly Galvin on as a faculty member in August 2021.

Having “cut her teeth” at Shakespeare & Company (where she has been a company member since 2008), Galvin is an accomplished director, producer, and teaching artist at such notable places as WAM Theatre and Boston Playwrights’ Theatre. She also founded the rig, an organization that’s working to create connections through the arts to redistribute cultural resources to a larger section of the Western Massachusetts community.

Galvin and her husband had lived in Boston and the Berkshires for a decade before settling in Lee in 2020. After years spent traveling for her work, landing a full-time job with CATA felt like a truly aligned fit, spiritually and emotionally—a place where she could have a lasting impact.

For Galvin, the pandemic reality teed up a pivotal moment that left her questioning, “How am I showing up and using my skill set to serve the community in a meaningful way?” She saw in CATA an organization on the cusp of enormous growth before the pandemic that was needed even more during the pandemic. “So many CATA artists and partner organizations reached out to us because of the isolation that many people with disabilities experienced,” she recalls.

Galvin, who sees Shakespeare’s work as a powerful vehicle for self-expression and for dealing with the most challenging human emotions, is continuously “blown away by the insights and talents of CATA artists and how the plays speak to their lives and to the world.” Performing Shakespeare’s work also stretches some people’s assumptions about what artists with disabilities can achieve.

Her first big event on staff was co-directing CATA’s Gala and Annual Performance in May. “I was immediately struck by the work CATA does,” she says, “how the faculty care for, connect with, and collaborate with CATA artists and the way that feeling is shared with the larger community.”

Kelly Galvin joins CATA artists on stage at the May 2022 gala. Photo by Christina Lane

Galvin describes the moment when she and co-teacher Greg Boover joined the Shakespeare Players on the stage as especially rewarding. “It was the first time they performed live since before Covid, and they returned to a tidal wave of applause, love, support, and energy. I understood how they were empowered, lifted up, made stronger.” Even after so many years working in theater, Galvin described that palpable energy exchange was “breathtaking—there’s nothing quite like it.”

According to Keller, the recent retirement of long-time artistic director Dawn Lane created an opportunity to form a new collaborative model that recognizes the explosive growth of CATA’s programs. “This new structure is rooted in our relationships with our 50 community partners—residences, day programs, schools, and nursing homes.” 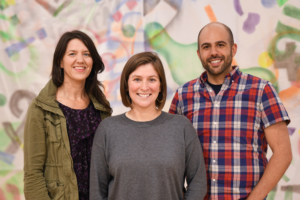 Kara Smith, a visual artist, oversees partnerships for studio-based programs in CATA’s new Arts Center (in Jennifer Commons), with two large studios and a smaller workshop space. Jeff Gagnon, a visual artist who started working with CATA as a college intern, runs school-based programs, which have nearly doubled in recent years. Kelly Galvin’s role is to spearhead CATA’s programs in partnership with day programs and community-based organizations; she will also direct performances showcasing the talents of CATA artists, including the annual gala performance.

“It’s an important time for us as an organization to build out the infrastructure and invest in our staff,” Keller says. “There is so much change afoot in our community and world, it’s our job to always be listening and reevaluating what needs to happen next to keep us moving forward.”

As such, CATA is planning to offer new workshops, new art forms, and new pilots along with adding three new staff positions.

“The countless workshops we offer are all designed to be sustained rather than one-off opportunities for our CATA artists, helping them dig deeper, experiment with new techniques, and discover talents across many different genres and art forms,” Keller points out.

Program partners typically contribute 25 percent of the program costs; the other 75 percent comes from donations.

“Covid turned everyone’s life upside down, but I don’t think people have given enough time and attention to the degree of isolation people with disabilities experienced,” Keller explains. Close conversation with CATA partners, artists, and families in those early days and months of the pandemic was an important spur to action, further underlining the need for new programs and triggering much of CATA’s recent growth.

CATA’s partners responded heroically, Keller says, with direct-care staff in particular stepping up to keep people safe. “We needed a lot of technology to deliver services, but we trained, learned, and experimented and were soon able to hold virtual classes over Zoom and other platforms.” While many nonprofits furloughed staff and cut programs during the peak period from March to August 2020, CATA expanded, offering 450 programs entirely for free. 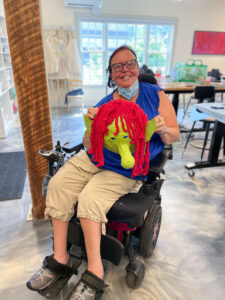 How the nonprofit was able to do that and build a beautiful, fully accessible Arts Center in Great Barrington is a tribute to the supportive community here in the Berkshires, which generously stepped up in response to an urgent request in May 2020. “That was a powerful and career-defining moment for all of us,” Keller says. “We believe in the power of the arts, but we realized the importance of everyday human connection in a new way. It was so vital for our artists to be creative and still discovering, especially in such a dark time.”

Keller credits their resiliency and resurgence to CATA’s dedicated staff, board, partner organizations, and donors. “That kind of community support makes us unique—they are all financially invested in our work, which is ultimately an investment in inclusion.”

Prior to the pandemic, roughly 75 to 85 percent of CATA’s income came from donations and grants. That support has now risen to 90 percent.

Facing critical challenges in planning for the future

For Keller, addressing equity and inclusion is the top priority—and she points to CATA’s partnership with Multicultural BRIDGE (Berkshire Resources for Integration of Diverse Groups through Education) as a way to learn what inclusion and inclusive leadership looks like.

Citing CATA’s original founder Sandy Newman, Keller admits, “We’ve worked hard to make everyone feel welcome and included, but there is still more work to be done to create a truly inclusive, equitable community. This development is key to our growth and strategic planning for the future.”

READ the full article on TheBerkshireEdge.com